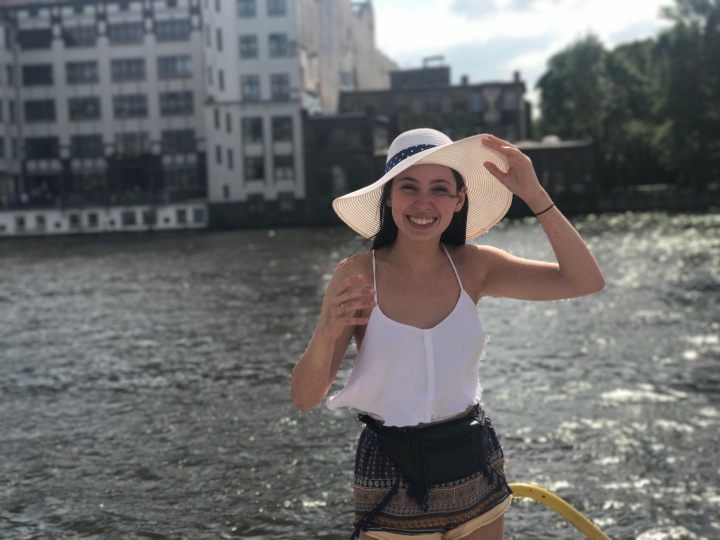 Eunan and Myself went Interrailing, summer 2017

Our first stop was the vibrant city of Berlin. Berlin was definitely a spot i would go back to as there was still places i would love to visit. Its a very hipster city i would say yet still full to the brim with culture.

One wee point i must say is just wonder about the city, we didn’t have a clue were we were going but walked around for a few hours and found cool places. Everything is so close by u don’t even realise it. Berlins Train service is amazing! So handy and easy to understand and use. Maps was very helpful as well in that you could change to public transport and it gave you which train to get on, how many stops your on it for and what time each train comes! It was super easy to get around the city, even Eunan was able to get around it without my help.

During Interrailing every stop we went to we always tried to find free walking tours. No they are not free but basically you get toured around the city and you get to decide how much you will tip them on how good the tour was, not a set price which was fab if you were broke students like ourselves. The fab thing about the Free walking tours is that they were locals in that, yes they did bring us to touristy parts but also brought us to places you wouldn’t have seen on your normal tour. They were also very helpful in telling us funky places to eat, drink and party at! The Free walking tour we always try get is Sanderman Tours. They have tours is so many main cities, so helpful if you want to really explore the city.

Our first stop of the tour was Brandenburger Tor, or as called Brandenburg Gate. This is placed in a very central area and a lot of tours start here. I would definitely a recommended place to go to first to find your bearings. From here so many attractions were very close. 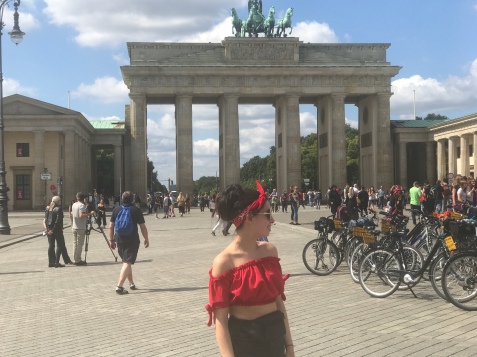 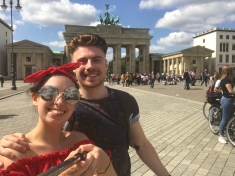 The closest was The Memorial to the Murdered Jews of Europe, this is free to visit. The memorial was a very emotional place. Walking around the area and also the underground museum was really moving. 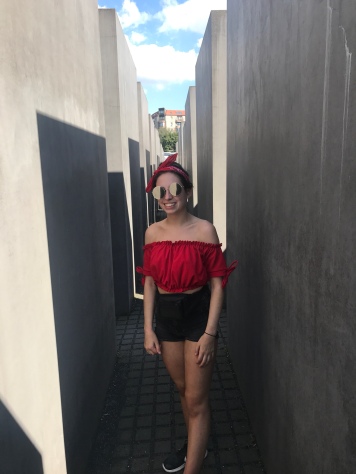 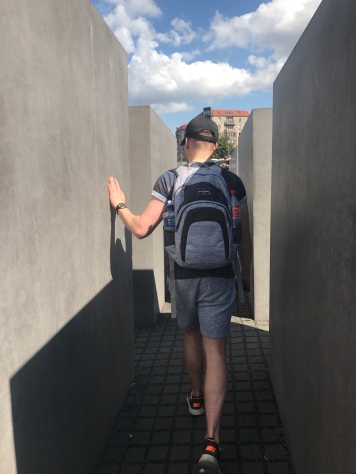 The Reichstag was very close to the Brandenburger Tor, this building houses the German government. It is quite famous for the Reichstag Fire, which happened in 1933, cause still not known but caused the start of the arrests of Communists and increase police action throughout Germany during the Nazi period. Unfortunately we werent aware that you needed to book in advance to tour it and be able to get up to the dome on the top of this so we didn’t tour it although we sat out the front of it. so *big tip* Get your tickets in advance if you want to go visit this! It is meant to be a really good tour and a nice view from the dome. 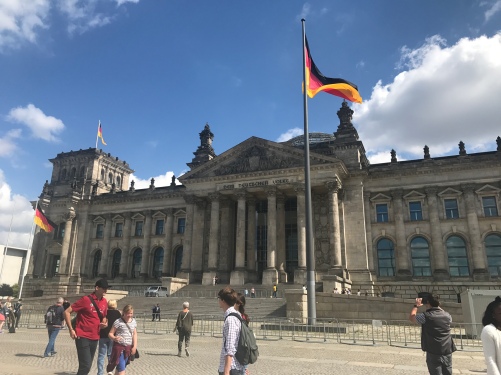 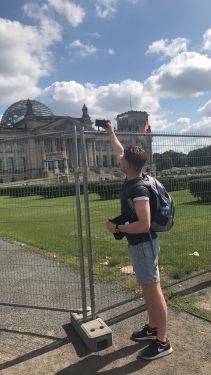 From the Reichstag you are able to walk to the Siegessäule, although it is quite a walk, follow the main road, which is about 20 min walk away from the Reichstag. The Siegessäule is a victory column in the centre of a roundabout, there is many roads which lead to different places of the city. You can walk up to the top of the tower which you can see over the city. Surround the victory column is Tiergarten Park. To make the walk easier on the way back walk through the park, it is beautiful with some historic statues around the place and cute flowers. 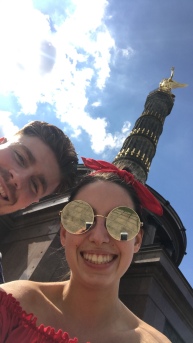 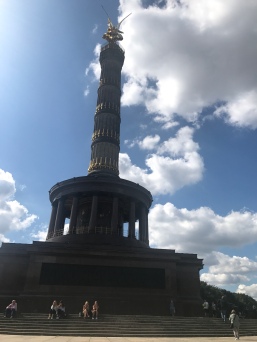 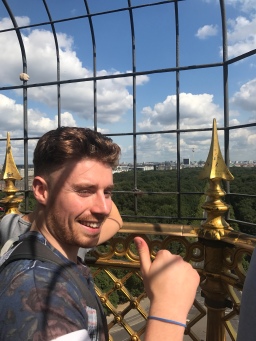 On our tour we were brought to the Berlin Wall memorial. The Gedenkstätte Berliner Mauer commemorates the division of Berlin by the Berlin Wall and the deaths that occurred there. There is a visitor centre here which you can read all about the wall. Our tour guide told us about the history of it. We then took lunch beside this where we tried Currywurst. This is a must try food when going to berlin. its basically cut up sausage in a curry ketchup and you are given a bread roll with it. We got this every day for lunch it was so nice. 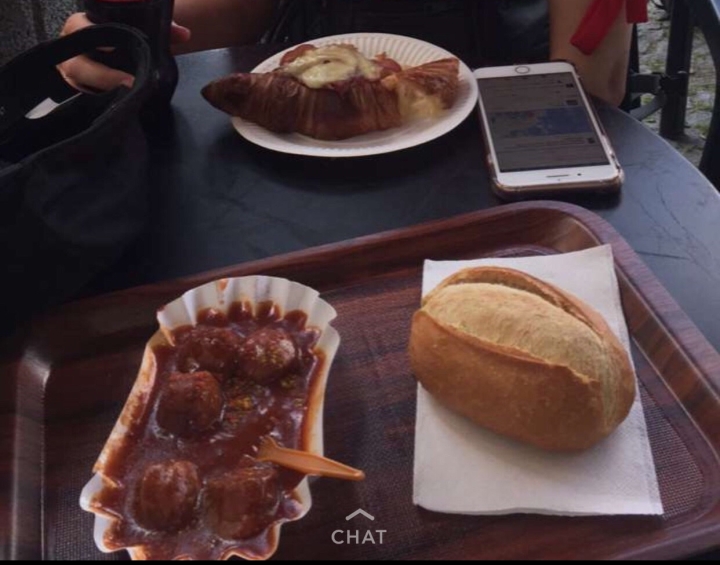 Checkpoint Charlie. We went here with our tour guide although he just showed us were it was but not actually went near it as he said it was a waste of money. It is basically a small guard house with men dressed in uniform which you pay to get a photo beside not that special so i wouldnt recommend this.

We also walked around Museum Island which is an island basically in the middle of the city which is surrounded by the Spree river. As you can guess from the title of the island is has museums on it. We didnt go into any but just walked around it. The buildings were nice to look at lol.

Our tour guide recommended to go to Markthalle Neun, which is a food market which happens every thursday. It was a fab recommendation as there was such a good selection of foods and real different ones not like your normal food market. It was very busy, although we still enjoyed ourselves. We tried Bao buns which are steamed buns which are Taiwanese Street Food, These were actually real nice we got spiced chicken in ours which was soo hot, burnt the mouth of me but was still class. Belfast has a food takeaway called BAO yet to try it but meant to be amaze and looks similar to what i had in Berlin so need to try it out! We chilled here for the rest of the night and had a few beers. I also got a Bubble waffle which was fabb. 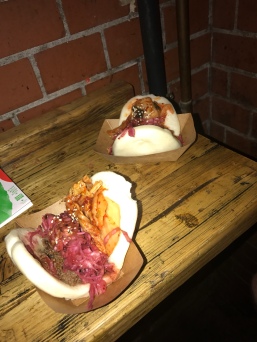 We decide to take a day trip to Sachsenhausen concentration camp, about half an hour train ride outside Berlin. We organised it with the same Tour guide although you have to pay a fixed price with this as you are having to get the train etc. There is a student price for this tour which is €14 instead of €16! Sachsenhausen was one of the first camps as it was the closest to Berlin. It was the administrative centre of all concentration camps and used primarily for political prisoners. It wasn’t meant to be a extermination camp although it ended up being one in the end with building gas chambers for the prisoners. We walked from the town and through the gates, it really touched me as we did the same walk as the prisoners. I would recommend taking a trip here it was worth it! 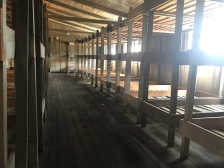 That evening we took the train to the East side Gallery. This is a part of the Berlin wall and is now the longest open-air gallery. After the Berlin Wall came down artists started painting on it, a year later it was given protected memorial status. I think it is very funky and shows not only Art but History of Berlin. Such a nice touch to the City. From having a wall which cause so much hate and angry and turning it into a piece of art quite amazing, 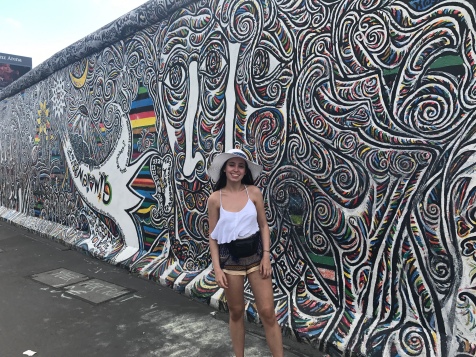 I would try the nightclubs, although we didn’t get into some as they are very strict, the nightclubs are meant to be mental. We didn’t get in as Eunan told me not to wear trainers as i would get in… so i wore sandals. Obviously i got turned away because of my footwear so *TIP Wear trainers :):) The queues to get into places are quite long as well and most nightclubs dont open til at least 12am. It would still be a fab experience. We were told also to wear darkish clothes to some of the nightclubs, i dont know why but they can be picky on even clothes.  Berghain is one of the most famous clubs, although very hard to get into. So try it you wish although you are best going to one that you might get into easier. Tresor is the one we tried and we would have got in only for my footwear as it is an abandon warehouse so could be dangerous.

We got a train to Berlin Friedrichstraße station, which there wasn’t much at the train station but it was more the area. We really liked the area in that it had lots of restaurants and nice views of the River from here. Was a nice area to spend the evening at. And yes there was an irish pub in this area to..

Im a sucker for Rooftop bars, and this one has been my favourite so far! We went to Klunkerkranich, It was kind of out the city but was very easy to get to from following google maps train bit. It is easy to get to but actually realising how to get up the the roof top is the hard part. It is on top of a shopping centre in which you go up the elevator to the very top floor. From here you walk out to a car park and walk to the end of it which you will find the ramp which leads you up to Klunkerkranich. It was such a good find! We were recommended to go early, which i suggest you do as well as it was full an hour after we landed (we landed at 6/6:30). Try grab a seat at the edge of the roof to see all around the city. Such a beautiful view, also watching the sun go down over the buildings was fab. I also suggest bring cash with you as they had no cash machine. It might now but didn’t when we went. You also do have to pay in but this can get you in and out. I generally thought this bar was so funky and chill. One of the best bars i’ve been to yet! 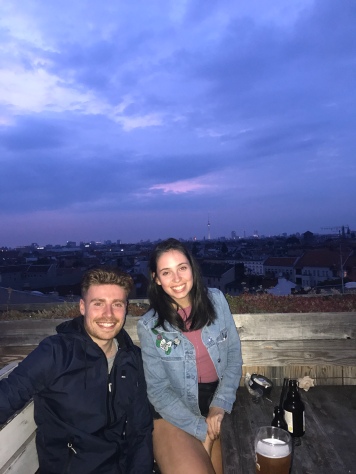 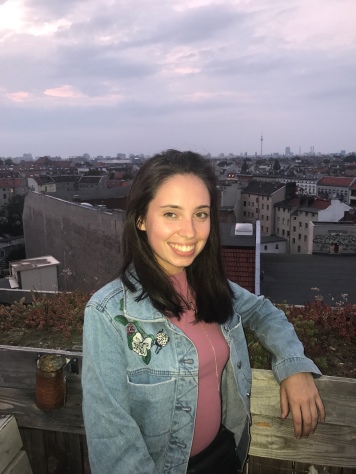 If you love Dogs, The Pub is a must stop for you. It is a Pug themed pub. Place is covered in pugs, even though im not a fan of dogs i went as you can pour your own pint at your table! Each table has a beer dispenser with a tap for each person at the table. It then has a monitor of which you can also order your food from. 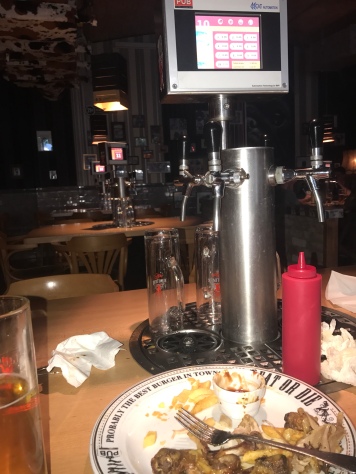 Our flight for our next city wasn’t til late so we decided to go to Berlin Cathedral which was a great shout! You have to pay to get in and to get to the top of the Cathedral, although bring your student card if you have one and you get some discount! Getting to the top wasn’t too bad. The views were worth it, just chilling at the top of it watching all the people from below was quite nice. 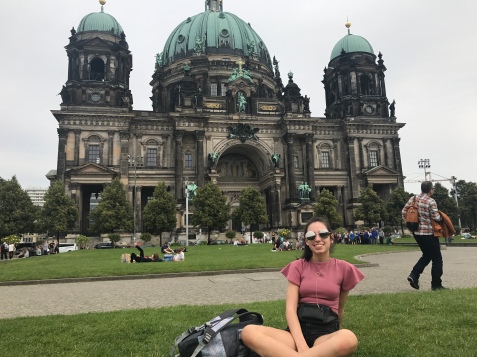 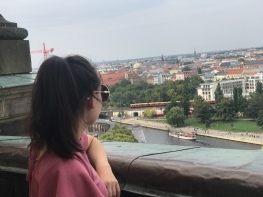 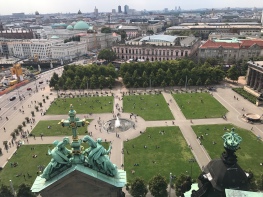 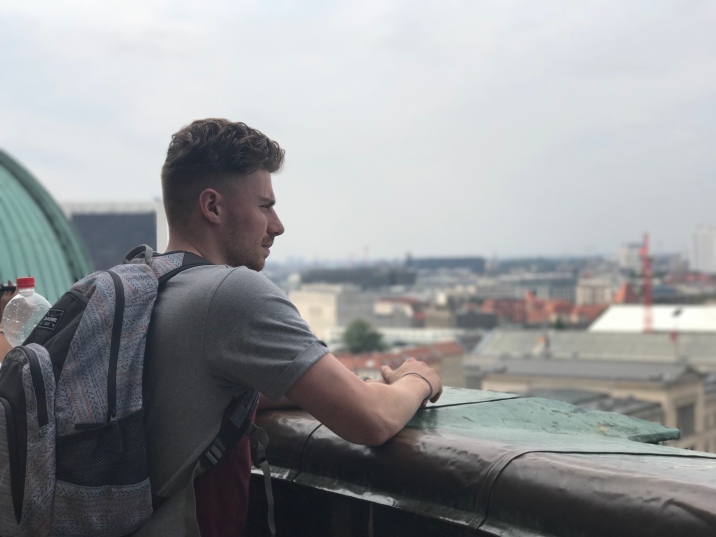