For Christmas this year instead of buying silly gifts I decided to buy Eunan a holiday (more a present for myself since I was joining him lols).

I picked Brussels, I don’t know why I just thought of somewhere different than the usual winter weekend breaks. We stayed for 4 nights in Pentahotel Brussels. It was a very funky modern hotel and I would recommend it! It was central enough to most places.

(*TIP* if going in winter legit bring ski gear it was bloody freezing. I had to wear leggings under all my jeans and trousers etc. it was that cold. Yes I’m a cold person but was still very cold.)

We got dinner in the hotel as we were starving once we landed. Was real nice food! I had been recommended to go to Delirium Cafe for beers. It was such a good shout! They have over 3000 beers, like how could you try every single one. It was very busy and really good vibes with it. They have beer menus showing different types of beers and their origin. Underground they have live music the place was buzzing, Eunan and myself kept picking the strongest beers… We didn’t realise but well Eunan was not well and couldn’t even remember half of the night loam. Would so recommend going here it was such a good vibe place. It is basically up an alley and the own the other bars around it. There was an absinthe bar if your up for it, I walked in and the smell turned me so nope.

The next day we signed up for a Sandeman New Europe free walking tour. Which was quite good as online I couldn’t find much to do in Brussels so the guide gave us suggestions and a bit about the history.

Grand place was a main tourist attraction for Brussels. We always ended up here every morning and evening and just chilled walking around looking at all the cool buildings. It is considered one of the most beautiful squares of Europe. I can understand why, the surrounding buildings are guildhalls and the town hall. The history of the Grand place is very interesting so I would so recommend getting a tour guide to tell you more about the place. 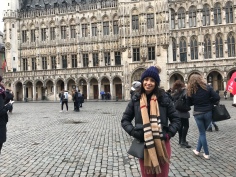 We then visited Manneken Pis, basically a statue of a wee boy peeing in a fountain lol. Was kind of cute..

During our tour we were brought around the area with the “crap” Belgium Waffles in which we were told not to get, as they are not authentic. Although I don’t think he mentioned where the good Belgium waffles where.. My best bet is to go to a shop, which doesn’t have poster upon poster of waffles, places which have posters of food tend to be tourist traps and not quality food.

We were told about French Fries, which aren’t actually French they are Belgium, and til this day there is still rows over who actually invented them. If you’re a fan of ‘French’ Fries you will love this place especially after a night out! French-fries shops everywhere with so many different sauces to cover them in.

Beer, now one thing is for sure Brussels is not short of beer. So much of it and so many of the bars have their own local beers on tap. Was very nice to see different beers on tap than your usual Coors Light, Heineken, and Guinness etc. Quite a few of the bars also did beer tasters which you would be given samples of the different beers to try them out. Definitely try Delirium Cafe and also it was an Irish bar beside the square in the main part of the town, Beside the McDonalds. The Irish bar did 1 Euro pints on the day we went and obviously the bar was full of students due to this. 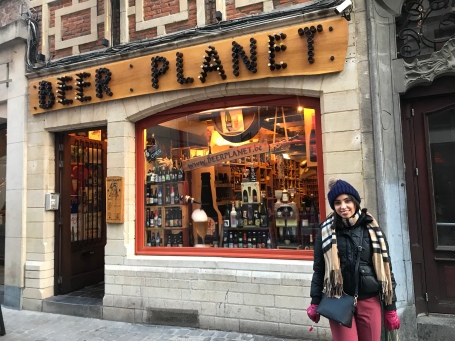 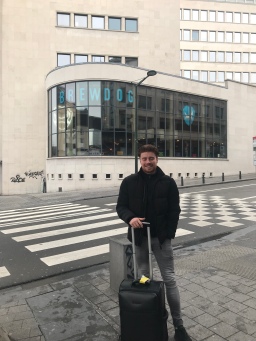 Belgium Chocolates, during our tour we were brought to Galeries Royales Saint-Hubert, which is a beautiful building as well as a nice place to window shop. We stopped into Mary Chocolatier. Now these were a different sort of chocolate from Galaxy or Cadburys. The chocolates were quite expensive but worth it. Such a unique taste, so beautiful. I brought a box home for my mother and she was so happy. The detail in the box and how was presented was just perfect. They were really worth the money.

We walked around Brussels city exploring. I didn’t think there was much else to the city expect for food and drink. Although walking around looking at the buildings i loved. The types of buildings were so different. 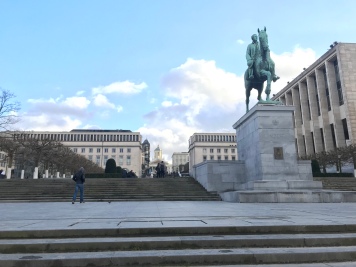 To be Honest, in Brussels we couldn’t find much more to do. We really did try but it was to hard. It was more of a food and drink city which we didn’t mind at all but i love exploring. We took a day trip to Paris to split the trip up. Paris blog to come soon.

We didn’t go to Atomium and Mini-Europe but they are meant to be good so worth a try going if stuck for stuff to do! 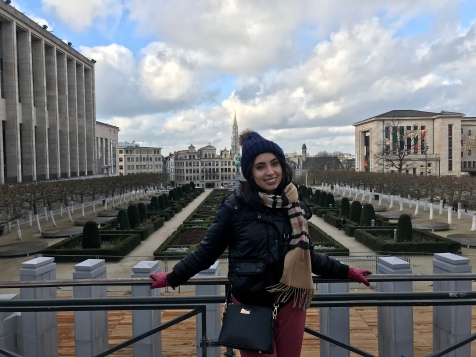