Salzburg has to be one of the most magical places I have ever been to.

Being a massive Sound of Music fan, Salzburg was a must stop on our Interrailing journey.

We stayed here for 3 days. most of the time during the day it rained which was quite annoying but it was still pretty.

We first walked up Kapuzinerberg, it is the hill on the east side of Salzburg. It was really nice as the walk up to it was a forest trail. There was so many view points on the way up looking over the city. We would recommend doing this to see over the east side of the city.

We then went to Mirabell Palace and Gardens. The Gardens are right in the centre of the city. In these gardens were where the sound of musics “Do-Re-Mi’ was sang. It was pouring when we visited them but they were so beautiful and colourful. You can also walk into the Palace and wander around the bottom floor. 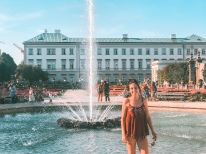 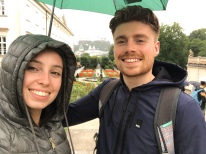 Exploring the town is a must. A map isn’t needed as it is quite small, and by walking around one can find many of the little cute shops and restaurants. We travelled to the city in August, and they had a few Christmas shops open! I ended up buying painted egg Christmas tree ornaments which must be a tradition in Salzburg as shops were full of them. 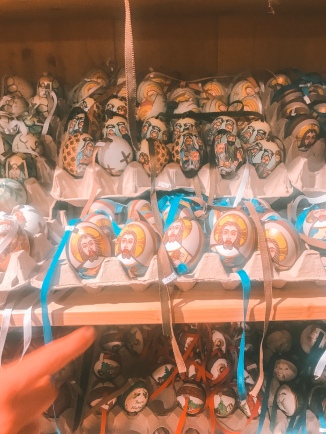 We decided to get on board a Sound of Music hop on hop off bus the next day which I would recommend if you are a fan of the film, and also just want to explore the different parts of Salzburg.

Our first stop on the tour was Leopoldskron Palace.

This is where the boat scene was filmed. You cant actually get into the palace as it is privately owned although we were able to view from on the other side of the lake from the Palace. It was such a beautiful view and stunning palace. Even going for a walk around the lake was lovely. 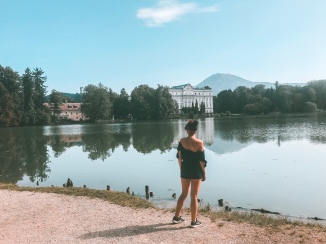 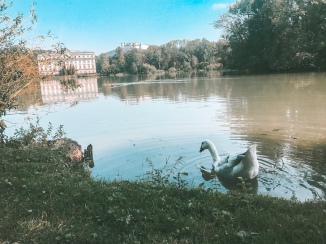 Hellbrunn Castle was the next stop. This spot was used for the Gazebo scene although there was so much more the the castle than just the Gazebo. It had stunning grounds, the rain thankfully stopped and we were able to really enjoy the gardens.

They also had trick fountains, these were originally used to entertain and surprise guests of the family who inhabited the Castle. They were created in the 1600s and still work perfectly. On the tour of the fountains there were hidden water jets and water powered statues. Every corner water popped out of somewhere. You couldn’t not get soaked on this tour. It was really funny seeing some unhappy parents drenched. 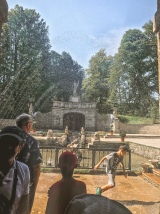 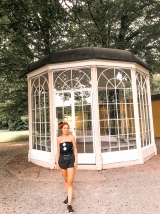 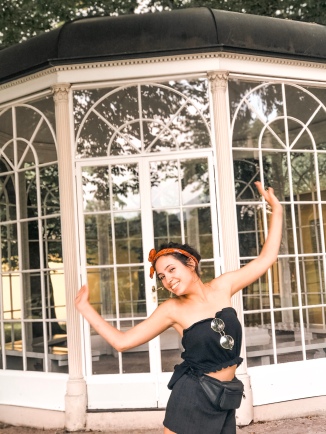 Next stop for the tour was Nonnberg Abbey. The abbey is the same one in which Maria was a novice and also got married here. Although it is still an active women’s convent and so you are not allowed inside the abbey. You can get a picture beside the gates but thats about it.

After the tour we decided to go up Fortress Hohensalzburg. The most notable landmark in the City. The climb was quite hard work.. but worth it for the views. If you’re not feeling up to it, there is also a tram that can take you up and down, but requires waiting. 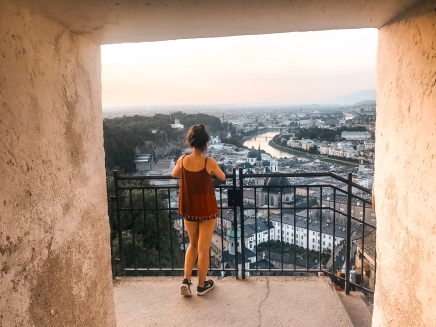 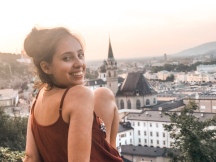 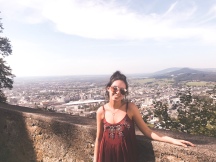 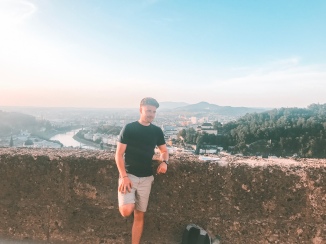 That evening we found L’Osteria, a pizzeria on a side street. The pizzas were large and delicious. Great value for money!

Unfortunately the entire following day in Salzburg was essentially plagued by rain. We had to find indoor activities as climbing up to a castle and doing hop on hop off bus tours in the rain did not seem appealing.  Salzburg is the home of famed composer Mozart so we decided to visit Mozarts Wohnhaus. This was Mozarts original home, and has now became a museum dedicated to his life. The cost was €11 which wasn’t too bad.

Due to the poor weather conditions we then sought out a bar,  we stumbled across a lil Irish bar called Celtic Spirit. We ended up staying here all day after the Mozart Museum. As much as it was crap to be inside for a whole day when travelling it was needed. You don’t even realise how much travelling and walking you do every day so a chill/ relaxing day was needed.

The owner of the bar recommended a Thai Food place, which was located relatively close by. So if visiting Celtic Spirit ask the bar tender about a Thai takeaway place. It was really nice and something different than Pizza and pasta. 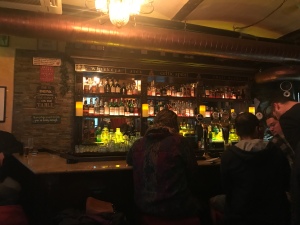 This was the end of our Salzburg trip as we headed off to Slovenia the next day. It is one of my favourite cities in Europe. So much to do and little hidden gems throughout the city. I would definitely recommended it as part of an interrailling trip!

Til next time, Frans Travels x